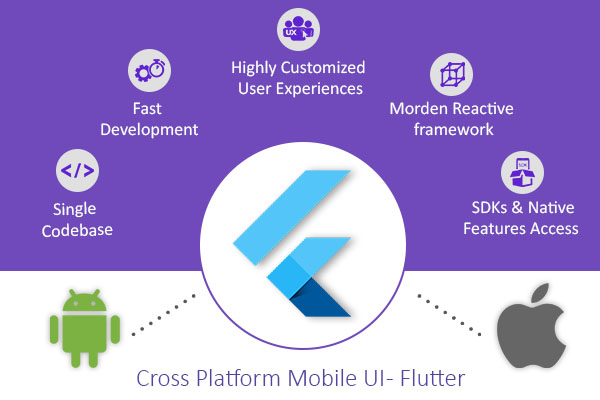 Flutter is Google’s mobile UI framework for crafting high-quality native interfaces on iOS and Android in record time. Flutter works with existing code, is used by developers and organizations around the world, and is free and open source.

Why to use Flutter?

-Do more with less code, even on a single OS, with a modern, expressive language and a declarative approach.

-Experiment by changing code and reloading as your app runs (with hot reload).

-Fix crashes and continue debugging from where the app left off.

-Flutter has an advantage of a rich set of Material Design and Cupertino (iOS-flavor) widgets built using Flutter’s own framework.

-Using Flutter, you can also use the native code 3rd party Sdk, APIs. Flutter lets you reuse your existing Java, Swift, and ObjC code, and access native features and SDKs on iOS and Android.

Install and run the Flutter you must meet the minimum requirement.

-Flutter depends on these command-line tools being available in your environment. (bash, mkdir, rm, git, curl, unzip, which)

You can clone the beta branch of the repository, then add the Flutter tool in your path.

You can set Flutter path temporarily as well as permanently. Below command is used to set the temporary path, for the current terminal window.

To add Flutter permanently to your path, follow the below steps:

Verify that the flutter/bin directory is now in your PATH by running:

The above command is used to check for any dependencies need to the complete setup. When you run the doctor command for the first time, it will download its own dependency and compile itself. When you run the command, it will display the following output in your cmd screen.

If You have already installed the android studio. Then just set the ANDROID_HOME environment variable to android sdk path.

Now we will setup the editor. With the Flutter command-line tool, you can use any editor to develop Flutter application.

Type  $ flutter help at a prompt to view the available tools.

You can build apps with Flutter using any text editor combined with your command-line tools.

Install the Flutter and Dart Plugins

Flutter is supported by two plugins:

Step 4: Set up your Android device

To run and test your Flutter app on an Android device, you’ll need an Android device running Android 4.1 (API level 16) or higher. By default, Flutter uses the version of the Android SDK where your adb tool is based.

To know more about Flutter or to build Android Mobile app; contact SimBeez